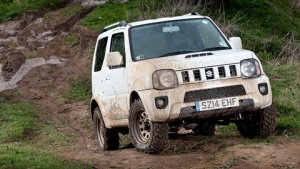 Back when I was young, Suzuki had this cute but tough looking 4×4 vehicle that early into its life was modified to take on rough terrain and eventually join off road competitions because of its size, power, and easy to modify. That was back late 80’s to early 90’s and then a couple of years ago Suzuki then launched a new version of the Jimny that literally made diehard fans jump with joy. With a few improvements here and there, the Jimny is personally one serious vehicle that I would personally want to have one in my garage be it for work or for play.

So the current-gen Suzuki Jimny has been in uninterrupted production since 1998. To put it another way, when the first MkIII Jimny rolled off the line when the Spice Girls were dominating the charts, Teletubbies children’s TV and New Labour the polls. And TFI Friday was still on TV the first time round. A lot’s changed in the wider world since then. But the Jimny hasn’t.

Sporadic (very) minor updates aside, the Jimny is still the same animal: a pint-sized separate-chassis off-roader with a switchable four-wheel drive system, cutesy Barbie Goes On Safari styling with non-existent front and rear overhangs, a small petrol engine and a full-size spare wheel on the back.

That lifespan is quite an achievement when you think about it, and it’s far from over. Suzuki’s not scheduling a Jimny replacement for another few years at least.

All Jimnys use an all-alloy 1.3-litre petrol engine with variable valve timing, 83bhp and 81lb ft of torque delivered from usefully low revs for off-road work.

Electronic stability control’s now standard too. Probably a good thing, as the Jimny doesn’t have the most confidence-inspiring handling on the road.

Push-buttons on the dashboard can switch between rear- and four-wheel drive while the Jimny’s travelling at up to 62mph, providing the front wheels are straight, and there’s a low-range mode too, accessible while stationary.