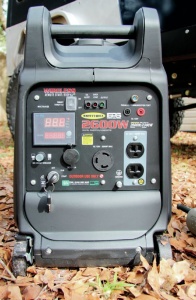 Hitting the road for a long weekend of wheeling with friends is one of the favorite past times for those who are into 4×4. Depending on where you live, your travel time could be a few minutes or a few hours. We often have to travel a few hundred miles to get to some destinations located at higher elevations.

If you are traveling, that means you are far from a power source. This is where the Smittybilt Generator comes in for the juice you would need.

Two 120VAC and one 12VDC outlets are easily accessible at the front of the unit. The digital display also lets you know where your numbers are. Weighing in around 90 pounds wet, we often strap the small unit in the bed of our truck and leave it for the weekend. The compact size (24.2 by 13.4 by 19.9 inches) makes it easy to store, and the four wheels are a nice bonus when you need to drag it around.

Powering the Inverter/Generator is an air-cooled 150cc CARB-compliant four-stroke engine. The three-phase inversion process unit uses a NRG Premium Generator that is rated at 2300 watts continuous and 2600 watts peak operation.
Behind the plastic shell is a NRG Premium Generator. For those that don’t know, NRG is one of the largest global energy providers. Essentially, the heart of the generator is backed by a well-known brand. This was a very smart partnership for Smittybilt. 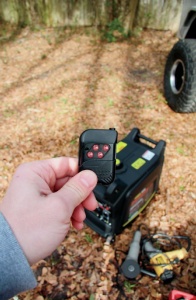 The remote start feature (yes, just like a fancy new car), is pretty novel, but we didn’t use it much. It typically only took one quick pull and the generator was up and purring.

To buy the right generator, you need to understand the output ratings. For the most part, we like compact inverter/generator machines. These will usually range from 1,000 to 3,000 watts. To determine what you will need requires calculating the approximate starting wattage and running wattage of the equipment you want it to power. More often than not, the watts needed to start a power tool can be nearly double that of its running watts. You can often get away with using a smaller (lower wattage) generator if you are only using one or two devices at a time.

If the running wattage is low, you can even run multiple devices, but you may have to stagger the startup and usage of higher-draw components. Most tools list power requirements in amps, not watts. To covert amps to watts, you multiply the amps by the volts. Again, be sure to investigate how much the device takes to operate. We’ve experienced tools that may say that it’s rated 1,300 watts but actually requires 1,800 watts of continuous power.