More than likely the brake system on that pickup truck or Jeep you take off-road almost every weekend is the last thing on your mind. On a daily basis, you are probably more concerned with gaining more power, improving traction, and upgrading the suspension of the vehicle.

Face it. You’ve added gobs of weight to the vehicle in the form of heavy duty bumpers, a winch, and any number of other assorted modifications. You have also increased the mass rotating at the ends of those axles with a set of custom wheels and huge tires. Now that rig isn’t as easy to stop on the trail as it was when driven off the showroom floor. 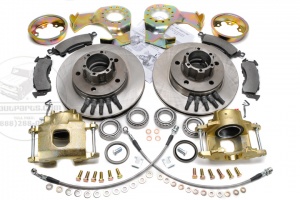 Upgrading to a larger rotor is always a good thing when it comes to increasing braking ability. The larger the rotor, the more rotor material surface, and therefore the greater ability of the rotor to absorb heat from the pad and shed it to the surrounding air, keeping brake fade to a minimum under hard and rapid braking events.
So what’s really important to look for when shopping for a brake upgrade? What are the myths, and what is good information? For this venture, we stuck to disc brakes, and took a look at a few primary points in brake system science to find out what’s important to know.

Swept Area
Swept area is something you see mentioned in specs when describing different disc brake systems. This is also known as pad annulus, or the area of the ring on the brake disc that the pad contacts (or sweeps) as the disc spins. While this is a good way to compare brake systems, it’s not the end-all-be-all to braking performance.

Swept area is not only a function of a larger rotor, but also a larger brake pad. A larger rotor may not necessarily mean a larger swept area, though as swept area can be limited by the space between the outside of the rotor and the brake hub (hat). A bigger pad will increase the amount of area the pad contacts the rotor and create a greater brake torque effective radius.
It’s a simple method to partly quantify the rotor size. Brake engineers and racing teams use swept area as one of the measurements when building brake systems. However, just because an upgrade rotor is larger in diameter than the factory rotor, doesn’t necessarily mean it has a larger swept area. In many cases, swept area can be more a consequence of the limitations posed by the available space between the hub and the outside dimension of the rotor.

What can be considered more of a benefit from a larger swept area is the fact that the brake pad’s friction block is larger. A larger pad, whether it is wider or longer, will take longer to wear out or overheat. The larger pad can absorb more heat, and will take longer to reach its fade point. The other benefit to a larger pad face is that there is now a larger contact area between the pad and the rotor. This provides a bigger and better path for the rotor to be able to pull heat from the pad and dissipate it into the air.

The reason a large rotor, as well as increased swept area, is a good thing is that the larger the rotor, the larger the pad can be and therefor an increase in brake torque effective radius can be achieved. You really want both.

Vented vs. Non-Vented
Because a brake rotor is basically a heat sink, one of the major jobs that the rotor performs is to dissipate heat into the air in between braking. So unless you’re building a competition-specific vehicle for which overall weight reduction is preferred over longevity or cooling capacity, heavier vehicles, and vehicles that are subject to sustained high-heat intervals, will always benefit from vented rotors.

One of the biggest misconceptions about brake rotors is the affect of drilling holes in the rotors. We have all seen statements that drilling a bunch of holes in a rotor will make your brakes run cooler and stop faster. This is a myth. In almost all cases, when you drill holes through the rotor, mass is taken away and no appreciable surface area for the rotor to dissipate heat from is gained to make up for the loss of mass helping the rotor absorb heat from the pad. There is also less contact area on the rotor face for the pads to transfer heat to.

However, in some cases a swap to a larger and heavier brake rotor that has been drilled may not be a bad thing. For instance, if you are replacing a much smaller rotor (with a larger, heavier, and thicker rotor, then the gain in mass could outweigh (so to speak) the loss in rotor face surface area.