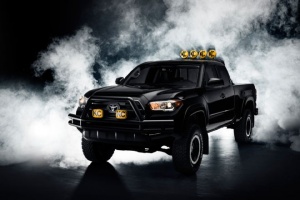 We’re big fans of Back To The Future and having watched all countless of times. When Toyota announced that they were working on a 2016 Toyota Tacoma in honor of the 30th anniversary of the film fans couldn’t wait to see it.

If you remember the movie, we know you do, Marty McFly’s dream truck was a 1985 Toyota Pickup in 4×4 with KC HiLites, awesome tube bumpers and a rollbar. Toyota has delivered on their promise and created a 2016 version of Marty’s dream truck starting with a 2016 Tacoma and upgrading it better than Marty could have ever imagined.

The Tacoma features classic Toyota styling on a modern truck. The wheels have been upgraded to the awesome beadlock style TRD versions with BFGoodrich All-Terrain tires. Exterior styling wasn’t left alone either the taillights feature the vintage three color housing while TOYOTA is boldly and proudly written on the tailgate. The stock bumpers have been replaced with modern versions of the classic tube style and the rollbar in the bed didn’t go anywhere. 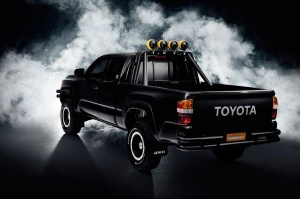 With proper Toyota badging on the door, mud flaps and exhaust the ’85 pickup is easily seen in this 2016 version. The KC HiLites feature their classic yellow covers with modern technology underneath, giving this truck just the right look Marty would love to see in his garage last October 21st 2015.