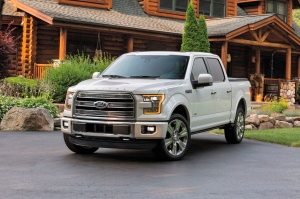 Who wouldn’t want to soak in luxury while enjoying power under the hood? When driving long distances would not seem like riding on a piece of rock that gives you bruises at every bump or turn. Think about mixing luxury with a truck and you get Ford’s new F-150 Limited.

Ford is expanding the model line-up of its best-selling truck by adding the Limited model to it’s long-list of luxury trim levels including the Platinum and King Ranch. For the 2016 model year the Limited F-150 will be packed with upgraded and advanced technology, luxurious interior materials, exclusive exterior details and safety features.

The Limited exterior refinements include exclusive 22-inch polished aluminum wheels, raised LIMITED lettering on the hood a unique grille, and satin finished chrome badge on the tailgate. The chrome front bumper will feature body-color end caps while the rear bumper will be completely body-color and bright belt moldings tie them together. Power-deployable running boards, quad-beam LED headlamps, and a tailgate release add to the functionality of clean styling of the Limited model. The exterior treatment is finished with satin-chrome door handles and a chrome exhaust tip.

Interior upgrades are reminiscent of the first-class cabin on an international flight with heated and cooled multicontour massaging front seats offered in black or Mojave leather. To further differentiate the Limited a laser-engraved VIN plate with production number is mounted to the center console lid. With genuine fiddleback eucalyptus and aluminum accents, the Ford F-150 Limited interior is the definition of luxury and won’t be mistaken.

Technology upgrades for the 2016 F-150 include Ford’s new Sync 3, with captive touch screen, AppLink and easy-to-understand interface. Exclusive to the F-150 is the Pro Trailer Assist. This feature allows drivers of any skill level the ability to back-up a trailer with ease by turning a knob right or left to indicate direction while the truck controls the turning and speed. BLIS cross-traffic alert, a lane-keeping system, and trailer hitch assist are also part of the technology pack.

The 3.5-liter EcoBoost V6 will power all 2016 Limited trucks and has a power rating of 365 horsepower and 420 lb-ft of torque backed by an electronic six-speed transmission. Available colors are limited to Shadow Black, Magnetic, Blue Jeans, and White Platinum Metallic tri-coat.